What has Kai been doing since the last episode? Well, growing legs and tails is what he’s been doing. Now I wait for the rest of his body! We experienced a lot of new adventures like a 5-hour hike in the woods. He absolutely loves walking in the woods, he was so happy! On the other hand, as a puppy, he cannot walk all the time by himself, so I brought a bag for him to carry. He hated it so much, he was almost screaming at some point! After this hike I was sure, he will be tired and sleep for the rest of  the day. Guess what? Of course, I was wrong: after one-hour sleep, he was ready to play for the rest of the evening!

Starting to add some speed in training

In training we had a massive breakthrough with his left/right turn! Last session he understood the turning solely on my verbal command! This made me super happy because this means, that I can start running, and I love running! I will now send him to the cone from a short distance and when he turns, I can run opposite direction with him chasing me. This will build his drive and speed without having a large impact on his joints. When you are training a young dog, it is very important to not overtrain. A couple of repetitions every now and then is more than enough! Focus should be on building a bond: go on adventures together and train basic obedience. Avoid any difficult physical activities such as running full speed to a complete stop. Basic rule that applies to all my training: the most important thing is to perform the task correctly and only after that, I can add speed. In a couple of weeks, when I introduce Kai to the tunnel for the first time, I will do the same.

Kai is now 20 weeks old and is losing his baby teeth, which makes him less keen on tugging. However, I know it will get better because he loved toys from the beginning! Kai is the perfect dog –  toy and treats are equal reward for him. This means I can reward with a treat when he needs to concentrate and with a toy when I want to build up his drive. I know that a lot of dogs don’t have a natural interest for toys or tugging and that is something I want to write about in this episode. Do you have a dog with zero or very low motivation for toys & tugging? I’m going to give you one of my best exercise to build interest in toys!

One trainer once told me: “Once you reward a sheltie with a treat, they will never want to tug! They will be interested only in the treats and you will have to teach them to like tugging”. Of course, this does not apply for all shelties. However, helping Lilly to train her two shelties, I know, there is at least some truth in this statement. Of course, not only shelties can have a problem with tugging, it can be the case in all sorts of dogs!

Bringing the play to the next level

Here is a step by step guide to build play drive in your dog: 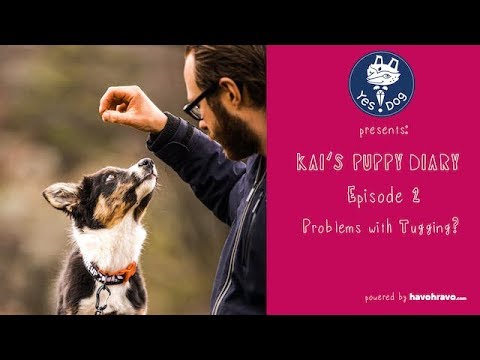 When your dog reached step 4, they should not have any problems with tugging, and you are ready to apply it to your training. I recommend you start with some easy exercise that the dog already knows and can easily succeed in. When the dog completes the exercise correctly, first reward them with toy – start tugging. After a short period of tugging, finish playing with your release command and reward with a treat. The dog must understand that in order to get a treat, they need to tug.

I hope this helps you in your training! Now, find out which is the favourite toy of your dog and work on your tugging games! In the next episode I will include a video to show you some tugging tips with Kai. We will also introduce extra training advice given to you by Lilly’s border collie Tips to show you the difference in an adult trained dog: new section called Tips from Tips! Maybe I will even show you Kai’s first encounter with the tunnel,  but who knows, no training is written in stone when you have a puppy!

Thank you for keeping up with Kai!

YesDog offers online courses to improve your agility skills. Visit their website www.yesdog.se – there is something for everyone from beginners to the experienced dog trainers, available in English & Swedish. Use our promo-code: HAVOHRAVO15 get 15% discount!

Choosing the right toy for your puppy

If your dog is not interested in toys right from the beginning, you have to make it exciting for them!  Show them, why playing with you is fun! When choosing a toy for a puppy, always keep in mind, they probably still have baby teeth, so the toy should be soft without hard balls. For their first training toy, ideally you choose something that supports their prey drive. Long toys that you can pull behind you on the floor and imitate a prey make them chase you and try to bite in the toy. For dogs with zero play motivation, toys made of rabbit fur or sheep skin often work magic. If you are really struggling to find a toy that wakes your dog’s attention, think about what makes your dog get excited? Is it stealing your socks from the bathroom? Is it the mop when you clean the floor? Is it pom-poms on your winter hats? Take these subjects and start building the prey drive with them!

Yes!Dog is founded and run by Tobias Sjöberg and Lilly Leete in Söderköping, Sweden.

They manage seminars in dog training, focusing on Agility in Sweden, internationally and online. They always make sure that the training is focused on you and your dog as a team and educate with sustainable and positive methods.